In a divorce, one of the most difficult aspects to resolve revolves around financial matters within the marriage. For better or worse, money, and financial issues, are one of the leading causes of divorce in this country, which means that during the dissolution process it's bound to make things more difficult for both parties.

While money in and of itself, and determining those assets, are extremely complicated when it comes to most legal matters, for divorce the worst offender is dishonesty. Unlike other common issues during a divorce money can cause a person to dig in, and create a veil of secrecy because of a feeling that they're the sole person entitled to what they earned during a marriage that is now failing. Secret bank accounts, hidden income, and any number of devices are used to keep the true value of a person's income out of their spouse's reach. Hard feelings arise easily when one person feels that their spouse doesn't need to inform the other of something that is theirs alone.

Aside from, but including, worst case scenarios, a Financial Disclosure is a legal attempt to get to the bottom of a person's financial information, so that a fair and equitable dissolution can be reached. Thankfully most divorces aren't so messy that they require a heavy amount of effort in trying to uncover money. Actually, according to the Florida Bar, case law has determined that in some cases Financial Disclosure's aren't even necessary.

But in the cases that it is used, a Financial Disclosure can include some of the following pieces of financial information, but are certainly not limited to them:

The process of discovering the facts are half the battle. A thorough and experienced attorney will make sure to cover all these topics, and more, and determine what should be included in a person's Financial Disclosure. The decisions made in this process can make the difference between a fair divorce, and one that requires further litigation.

VilarLaw has been practicing family law for the last 20 years. When going through proceedings of receiving a spouse's financial information for the purpose of dissolving a marriage, VilarLaw's experience is invaluable to quickly uncovering assets and income, and insuring that they are split fairly among the divorcing parties. Contact the VilarLaw Offices at (305)373-8000, to schedule a consultation. 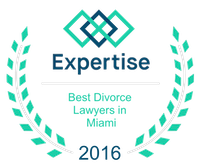