Florida's Position on the Rights & Responsibilities of Sperm or Egg Donors 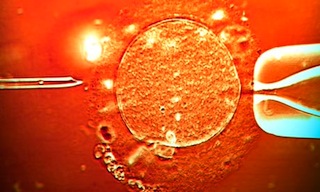 There are a few reasons a couple might want to have a baby via the donation of sperm or an egg from another person. One or both partners in a heterosexual relationship could have health issues and be unable to conceive on their own. Also, a same sex couple could want to have children of their own.

Adoption is an option, but for lesbian couples, there is the possibility of one of them giving birth via donated biological material. Gay couples could donate sperm to a surrogate mother. And heterosexual couples where one partner is infertile may still want to use an egg or sperm from the other partner when conceiving a baby. Couples may prefer using a donor over adoption because the child could be biologically related to at least one partner in the relationship. Women can also have the experience of pregnancy and birthing their child, which clearly would not be the case with an adoption.

These scenarios work out well when the relationship lasts and everyone lives happily ever after. However, life is not always that simple. Sometimes the relationship ends, parties get divorced, and responsibilities over the child may need to be litigated if the parties cannot reach an agreement on their own.

Usually there are spelled out legal agreements in these cases, and the donor gives up all paternal rights. Doing so also relieves that person of any financial obligation. However, in at least one state, that is not the case.

A Kansas court ruled in 2014 that a sperm donor had to pay child support payments for the child that resulted from his donation. In the case, the donor had donated sperm to a lesbian couple five years earlier, and signed an agreement that gave up any paternal rights. The couple later divorced and the mother with custodial rights sued to receive child support. The state took up the case and the court ruled in the state's favor.

The donor's attorneys felt that the lawsuit was politically motivated as gay marriage was not recognized legally in Kansas at the time. The court ruled he was liable because Kansas law states any such donation must be done under the supervision of a physician, which did not happen in this case.

Florida residents may be safe, as the Florida Supreme Court has ruled that the donor of sperm or an egg has no rights concerning the resulting child. In many states people sign papers to give up those rights. In Florida, a person would have to sign legal documents to establish any kinds of rights at all in the first place. Otherwise, a donor has absolutely no parental rights to the child and would also not be obligated to pay child support.

However, there is one notable exception: Intent. Florida courts measure the intent of the people involved, and some legal experts say this protects lesbian couples in most cases. The courts rule that if the intent was that the donor would raise the child as their own, that would have weight and that person might retain some rights or responsibilities over the child.

Florida state law recognizes separate definitions of "parent" and "donor" in a way that many other states do not. The law is based on who intends to take on parental roles with the child, even before the child is born, not on who provided biological material to conceive. This comes up more when people want to establish rights, and in Florida -- at least so far -- no one has tried to force a donor to pay child support. It will be interesting to see how a Florida court will rule in such a situation, but it seems like the Court would not require the donor to pay child support if the intent was that they would act solely as a donor and not expect to have any parental responsibilities in relation to the child.